Lost Order is a TTRPG mixing alternate history, heroes, magic, and time-travel, drawing inspiration from the Fate/Stay and Fate Grand Order video games by Type-Moon. No prior knowledge of the Fate universe is needed however-- just a love of mixing history and fantasy.

To play you need 4-8 players, including a GM, and three six sided die. Lost Order is best suited for short campaigns (5-10 session), but can be easily be extended into longer adventurers or used for one-shots.

Your purchase includes the 20-page fully illustrated rule-book and printable custom character sheets for each of the three asymmetrical classes. Players take on the roles either of human magician Masters, summoned mythological Heroes, or fusions of present and past, Demi-Heroes. Each classes has a wide variety of Skills, Origins, and Birth options to help customize characters quickly and easily. Lost Order uses the Powered by the Apocalypse game system, expanding upon the familiar rules to allow for successes that go beyond what is humanly possible.

All illustration work was completed by Mel and Bee. Copy-editing was completed with help by Passionfruitpavlova. Character sheets were made by hktk1059.

Writing, design, and play-testing was completed myself. For additional guidance on the rules, to request a copy due to financial difficulties, or just to say hi, please message me at @Nrvnqsrestray.

I will be updating the game as much as I can with your feedback and as always, the most updated version will always available to you free of change, no matter the price charge. This also includes any sample campaigns I add in the future.

In order to download this roleplaying game you must purchase it at or above the minimum price of $4 USD. You will get access to the following files:

It's 21 pages, with a lot of neat interior illustrations and an easy to read layout.

It's also probably the single best crash course on Fate lore out there. There's a lot of Fate, and it's all super tangly, but Lost Order does an excellent job of explaining the basics in a quick and comprehensive way.

For folks who haven't played FGO or engaged with Fate media, I don't know if this is the best place to start, but also that's true of everything else in the franchise.

Mechanics-wise, this is a relatively complex game, and it reproduces the in-universe mechanics of Heroes, Masters, and Demi-Heroes. Mana exists as a universal currency, but all three classes use it differently, and each has different innate powers, limitations, progression strategies, and peripheral mechanics.

Rolls in Lost Order use basic PbtA, with some modifications. Heroes have higher stats than Masters, but Heroes need to roll higher to attain full heroic-level successes. Rolls can also be Enhanced or Weakened by circumstances, in which case they use 3d6 and the best/worst 2 dice.

Character creation feels satisfying---in that you have a lot of control over your unique build---and you can have multiple different game plans within the same class. Heroes have access to a wide Skill list, which consists of powerful tactical options and enhancements that can suddenly tilt the balance of a fight, but every class has at least one unique core mechanic that affects their play.

Lost Order is, at its heart, and combat game. And combat-wise, Lost Order is a little weird. The central loop is tight---roll an attack, deal damage if you roll high enough---but everything else has a lot of deliberate gray area. Attack damages loosely follow a chart, but will need some GM interpretation. Different attributes can be used under certain circumstances to block attacks, but there are tradeoffs to doing that. Masters can shore up Heroes with Mana, and Heroes can set up Mana barriers to deflect attacks, but running out of Mana can cause a hero to degrade or de-manifest. Masters can spend Seals to boost or command their Heroes, but Heroes can otherwise easily one-shot Masters. Add all this to a setting that deliberately encourages asymmetrical fights, betrayals, deoptimized characters, and tragic struggle, and the result is potentially very complex.

Progression is also asynchronous in Lost Order, and can involve leveling up to grow your stats (a process that is different for every class,) or it can involve fulfilling a variety of other Skill or class-linked conditions to grow stronger or weaker.

For GMs, there aren't a ton of resources provided here. There's some general advice about creating enemies, but nothing pre-cooked and mechanical, and likewise no intro scenarios. There *is* advice about safety and respect, and guidance throughout the document on how the game is supposed to work.

Overall, if you like Fate, I think you'll like this. If you're neutral about Fate, I think you'll still like this (I am, and I did.) If you have no former knowledge of Fate but you like big, fraught battles over ideals and loyalty, liberally peppered with re-interpretations of history and folklore, you might like this. I'm not sure how easy it is to perform the game's intended play without setting knowledge, but as long as someone in your group sort of knows the franchise, you'll likely be alright.

-Page 1, "and even experimenting" experimented with

-Page 4, two instances of 'resting' instead of 'resisting'

-Page 6, the + and - rules are repeated in a way that's a little confusing

-Resistance and Determination feel weaker than every other Skill.

-Unnatural imposes an extremely steep cost, to the point where the 1/session limitation doesn't feel necessary. Maybe you can't use it if all your attributes are Weakened?

Accessible for both new and long term fans of the series, this gives many people opportunities and chances to expand their own creations (from any type of character to lore) that they want to see playing out. It’s not hard to understand either, so perfect for newbies (like yours truly!). A very welcoming start altogether.

Please tip the creator if you buy it, as it is a very accessible game!

Love this game so much! So glad someone did this!

Thank you! That means a lot from someone who also plays with PbtA alot! I want to take a look at your games now too.

This is great! We love a diverse ttrpg!

I’ve been looking for an RPG like this for so long! The rules are simple to pick up and balanced, but still have their own flair. Artwork is beautiful and layout is clean and flows well. Definitely a recommended buy if you like Nasu content, or PbtA games, or both!! I already have so many ideas for plotlines I want to run or play! :) 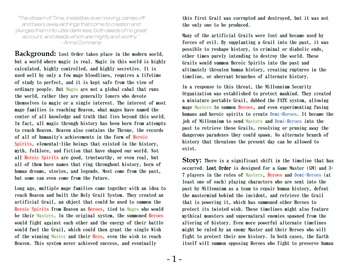 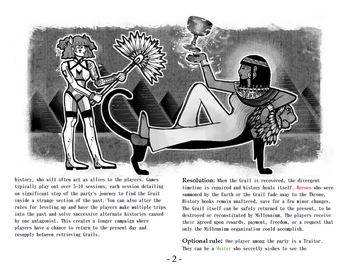 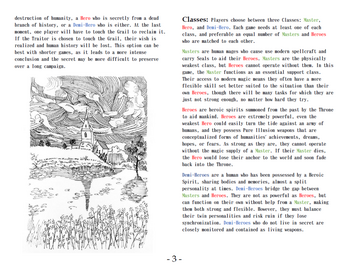 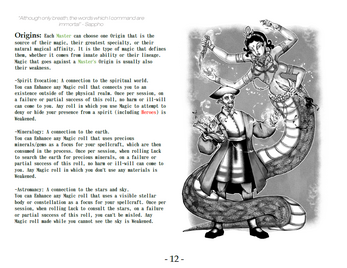