A microcosm TTRPG of insects and intrigue. Explore the mysterious bug city of the Cuticorium, orchestrate plots for supremacy, and uncover the secrets of the outside world.

Playing as a tiny bug is a daunting task without help. Using the unique Web system, you can build and burn connections with the land, other bugs, or yourself. Web tokens are used to power friendships or preserve the natural order. Mix and match from 21 Features to define what type of bug you are, opening up new ways to spend Webs and lay out your schemes. Cuticorium uses a GM/Storyteller, 2-5 other players, and d4 dice.

Credits: Illustrations by Melisa Echavarria, Escher Cattle, Steven ‘Ski’ Nosov, Leo ‘Crab Boy’ Dreamcider, and Hibi. Editing and formatting by hktk1059. Soundtrack by Daniel Elsberry. Consulting by Heather O’Neil and 9th Level Games. Thank you to all the Kickstarter backers who made this game possible.

If you purchase a physical copy from a relator, message on twitter or by email with a picture of your book and I will get you a download code to the digital content.

In order to download this bug game you must purchase it at or above the minimum price of $15 USD. You will get access to the following files:

Support this bug game at or above a special price point to receive something exclusive.

For those experiencing financial difficulties. Because hexagons are very sweet, every six copies purchased adds one honeycomb copy for someone who otherwise couldn't afford the game.

This game is tagged as GM-less but the information presented here says that it's not. Can you play Cuticorium without a GM?

Ah, the GM-less mode refers to the solo play mode. But it is also a very easy system to play GM-less by using the Ommatidia tables to generate new bugs and taking turns making scenes among the players.

If you email me or message me on twitter, I'm happy to send you a download link of the game so you can try it.

I'm getting very excited to try Cuticorium and I haven't shut up about it since I found it. I do have a question about the rules though, and I hope the comments on itch is a good place to put it?

I'm wondering how and if NPC bugs use moves? When games I'm familiar with use capital M Moves they are all rolled by the player and the GM simply calls for the players to roll appropriate moves. The fact that NPCs use their webs to affect player rolls (and not the other way around) seemed to support this. But NPCs have favourite (panic?) moves as well as Features that modify their moves. Do NPCs in Cuticorium attempt to Scar and Comfort other players, or Transform their image in the player's eyes? And does it work the same as players doing so, but with the GM rolling the die and spending webs?

Thank you so much, I love your excitment and I hope you have a fun experince playing it with friends.

For your question, NPC bugs don't use moves, but NPCs can still gather Webs. Just as player can use Webs to reroll unfavorable results, a conflicting NPC can use thier Webs to reroll the players favorable results to try to oppose them, or spending Webs to power their features. NPCs with lots of Webs could be highly knowlagable bugs with vast amounts of connections and leverage. Webs are like Cuticorium's leveling system in that way.

The Scar move is the exception to this, if there is an NPC bug that initiates a hostile physical attack on the players. But generally Cuticorium wants the players to be the active force and the NPCs are reactive to the player's failures and successes.

Thank you! I have one more question, if that's alright?  I loved the NPCs in the adventure module, especially the amber snail seer that was filled with visions of a sky creature savior after getting infected with a green banded broodsac. The illustrated bugs in the book are all dripping with personality, I want to know if they have more fleshed out characters as well or if those details were only added for the module. Of course I could try and fill in the blanks myself but I found the snail so clever it made me very curious about the others. Are there more details on them somewhere?

Ack sorry I kept meaning to resond to this and forgetting.

The bugs illustrated in the book don't have any perticular characters to them, but I do like to use them as refrences when making new NPCs for games. Those ideas might make it into another adventure module one day, but that still won't be their 'official characterization' or anything. All the art is for player insperation, and I love to hear the stories you imagine for them.

I highly recommend getting a physical copy.

If you ever print more physical copies, call me!

Ring a ding ding! More physical copies are in print right now as we speak. They will be available in the IPR store again very soon, as well as at Gencon and Origins in the IPR booth.

It is back in stock now!

Thank you so much, I placed my order!

The art in here is wonderful! Just skimming through it I could already see several of the themes mentioned in the playtest represented through visuals alone. The whole book has a captivating aesthetic element. Even if one isn't able to play Cuticorium, one can get quite an experience just reading the guidebook. Thank you, Duck.

Also, I was involved in a pre-release playtest of Cuticorium. Our characters started a skyclad cult, invented electricity, and accidentally killed our profit (RIP Kukato). It was a wild ride, and one filled with self-discoveries very different from both what the players and game creators expected.

Not a day goes by when I don't think of that game, at least how it was relayed to me. I could not be more pleased to be so surprised.

Reviewing trpgs is sometimes a bit like entomology. You'll think you know what they all look like, but then you'll lift up a rock and find something wholly new and bright staring back at you, forcing you to reevaluate all your preconceptions.

Cuticorium is one of those games.

It's loosely PbtA, in that it uses Moves and most rolls tend to produce success with a complication, but it's evolved in so many different directions that it feels like a fully different system.

In Cuticorium, you play as an insect that has been affected by the radiation from a unique stone. As long as you stay within the wide area around the stone, you can think and socialize and suppress your instincts. Many other bugs in the vicinity of the stone have done the same, and have built up a society of peaceful, self-aware critters.

I went in expecting Hollow Knight, but Beastars or Animosity might be a good point of comparison too. And unlike any of those stories, combat is *not* a point of focus for Cuticorium. In fact, if anything, I'd say it plays like a larp.

Most of your Moves as a PC are social, and many deal with personal growth and transformation. One Move is used for combat, but violence is positioned as a terrible thing that results from insects falling back on their basic nature.

Instead, the gameplay revolves around Webs. Webs are like Strings in Monsterhearts, in that you gain them on other people and places and can spend them for bonuses to rolls, but Webs are also your HP. Run out of Webs and your moveset is severely reduced, not to mention a single bad roll can kill you. This incentivizes you to socialize with other bugs, build up webs, and play a peaceful game instead.

Gameplay in Cuticorium is divided into scenes, and scenes take place in locations, which players can spend webs to claim or transform or link to other new locations. The point of a given scene is often defined by the players, but the GM can introduce an overarching plot as well and use that to stir up player conflict.

The interaction between PCs feels like the soul of the game, and it's what I'd suggest players lean into. Don't be an emotionless slate looking for battle. Have needs. Have regrets. Fight the nature your body was built for. There's a *lot* of room to customize PCs with unique Features that add new Moves, and every Feature plays into the serious physical differences between the types of bugs that all are trying to coexist in the Cuticorium.

There's *tons* of illustrated examples of these bugs in the book, by the way. It's dripping with high quality art. Every piece is gorgeous and creative and clever. Even if you never play it, it'll *still* be an inspiration to look at.

But the book does have some weaknesses.

One is purely a matter of expectation-setting. If what you want is Hollow Knight the rpg, this isn't that. Or at least, it's Hallownest before the fall, not after. Things are peaceful and busting, and you're not going to have cool nail-duels in the streets.

My other critique is a little more mechanical. Cuticorium's gameplay encourages you to dig into the thoughts and emotions of your character and slowly build up their relationships with the other PCs and characters of the setting. But if you leave the range of the Cuticorium and a beast shows up, there's a chance they just autokill you.

Beasts are monsters that can show up in scenes that take place at the edges of the Cuticorium's influence. When they show up, they roll a d20 and everyone present opposes them with a d4. You add the d4s together, and if you meet or beat the beast's roll, it *doesn't* autokill a random PC. So if you don't have enough PCs in a scene, and a beast rolls randomly to show up, and it rolls decently on the d20, one of the characters you've been building evaporates.

There isn't a ton the players can do to prevent this if the dice go the wrong way. So while this does create a cool threat that makes some areas terrifying to visit, it feels like it also has the strong potential to randomly zero out player agency. If this is something that might put you off, I'd recommend adding a "wound" system to your home game, where players can survive a beast attack at a cost.

Overall, though, I think Cuticorium is a gem. If you like the roleplaying part of rpgs, or if you're looking for something a little unusual to run as a larp, grab this. And if you're looking for fantastic character art, double grab this. Character creation in Cuticorium is fun, the web system is great, and there's a ton of potential for amazing storytelling in this system. I would absolutely recommend it to anyone who's reading this.

This review is so sweet and thoughtful. Thank you from the bottom of my heart, a wonderful comment like this is all that I could hope for with this project.

super wonderful game with a TON of heart put into it! this project was definitely created out of love and with the intent to have fun. if you're new to tabletop, it's also really easy to understand (coming from someone who isn't super familiar with tabletop!)

Absolutely, she is trans and she loves to use the Transform move. Confirmed by me and the artist Mel.

Hey Duck. I'm one of the cast members of Technical Difficulties Gaming Podcast (https://www.technicaldifficultiespod.com/). Would you be interested in a recorded interview about Cuticorium?

Absolutely! Direct message me on twitter or email. usducktape@gmail.com Thank you for the interest! 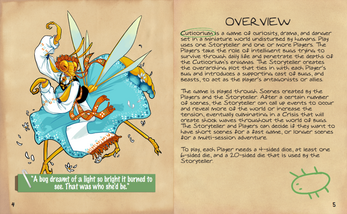 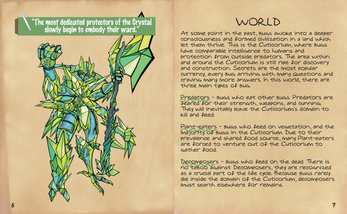 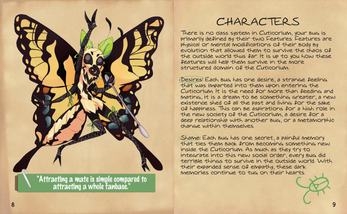 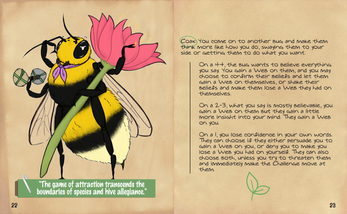 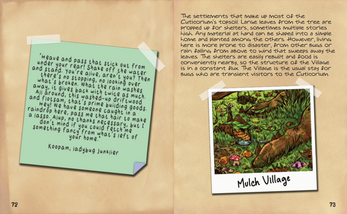 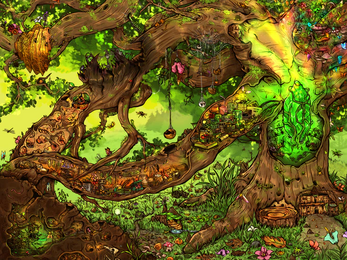 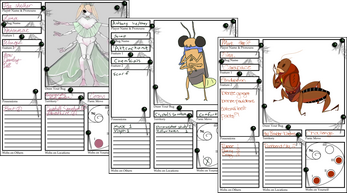